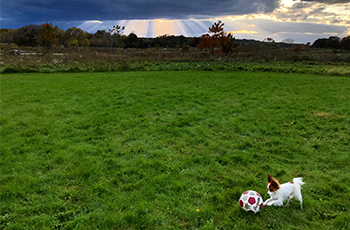 Dane County was one of the first park systems in the United States to develop designated off-leash dog parks. In 1991, Parks Director Ken Lepine received many complaints about park users letting their dogs roam free, despite a county ordinance requiring them to be restrained by a 6-foot leash.  It became obvious that there was a growing need for areas where people could let their dogs run free without impacting other park users. In response, the Dane County Park Commission established a Dog Advisory Committee to provide recommendations on potential off-leash sites, including new rules and regulations and funding sources for these new areas.

After an extensive national search, the Committee found only three officially recognized dog parks and no overarching dog park programs that the county could use as a model.  In addition to this hurdle, many local officials and citizens thought it would be a poor use of valued park land to develop park areas exclusively for dogs and their handlers.

Despite these challenges, the Committee recommended the creation of a new ‘Pet Exercise Areas’ program and developed recommendations and protocols that were approved by the Park Commission in 1993. Everything for this program had to be developed from scratch, including: rules, protocols, signage, site evaluation and even dog waste bags and waste removal techniques since these were not widely available at the time.

The first Dane County Pet Exercise Area was established in late 1993 at Viking County Park near the City of Stoughton. The dog exercise area was located on a 12-acre peninsula, where three sides of the land are surrounded by water.  This site only required one short side of the peninsula to be fenced. The fence was installed by volunteers and still stands today. Volunteers also cleaned the park, preparing it for public use. This first project was entirely funded by donations.  The second Pet Exercise Area was added in 1994 with an 80-acre site at Prairie Moraine County Park south of Verona.

As word spread about the new Pet Exercise Area program, park and recreation managers, politicians and dog advocates came from all over the nation to learn how to develop a dog park in their own area. In 1996, due to national interest in the growing program, Dane County created a “Pet Exercise Area Program and Development Guide” and shared it with the Wisconsin Parks and Recreation Association and National Park Recreation Association. The same year the name was also changed to “Dog Exercise Areas” to more accurately capture the purpose of the program. These areas are now commonly referred to as dog parks.

The dog park program has been tremendously successful and the dog parks are some of the busiest parks in the county. We now know that dog parks provide incredible health and social benefits for park users and their canine companions. Currently, Dane County has eight off-leash dog parks, totaling 268 acres, each with its own unique features and terrain.

Learn how dogs are welcome in the Dane County Park System on our Dogs in Parks page.